If you live in a snakehead-infested area like Florida, Delaware, Virginia, Maryland, Pennsylvania, New York, New Jersey, and Arkansas, you may be used to catching these invasive fish on snakehead lures, but another method that is becoming increasing popular is bowfishing snakehead.

Bowfishing is like a combination of hunting and fishing.

You utilize special bows and arrows with a string attached to the arrow and a reel on the bow to retrieve your catch. You then must quietly slip along and stalk unsuspecting snakeheads.

Once you spot one, you slowly get into range and then try to make a killing shot on the snakehead.

It has been a very popular method for killing carp in areas that they inhabit and now it becoming a popular way to harvest snakeheads.

How to Identify a Snakehead

As the name suggests, a snakehead has a head resembling a snake’s head. Snakeheads often have a distinct brown and black coloration. However, snakeheads tend to lose the brown color as they grow older, and most large snakeheads are predominantly black. There are approximately 50 snakehead subspecies worldwide.

Snakeheads quintessentially measure anywhere between 12 inches and 40 inches and have an unmistakable truncated tail. They also have a slender body compared to other fish species. The heaviest snakehead ever caught weighed 20 pounds. If you’ve ever tasted this fish species, you’ll agree that snakeheads have mildly flavored, white, and firm meat.

Where Can You Find Snakeheads in the Us

You should note that snakeheads love to hide in shallow waters with spatterdock, fallen trees, lily pads, submerged brush, grass, and other vegetation types. The upper reaches of the Potomac River have shallow water that allows significant snakehead populations to thrive. Aquia Creek and Occoquan River are also ideal locations for you to bowfish snakeheads as a beginner.

Strategies and Techniques for Bowfishing Snakehead 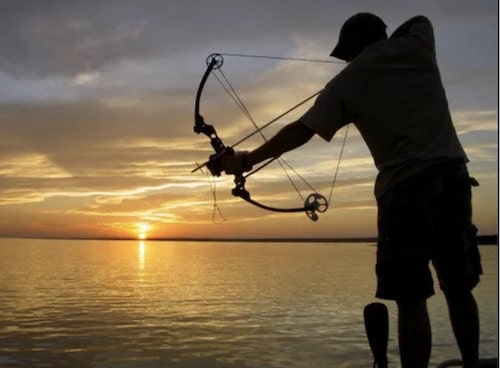 As a beginner, you want to shorten your learning curve by implementing practical strategies and techniques for bowfishing snakeheads well in advance. You will need to think like a hunter and stealthily attempt to sneak up on your prey.

You will need to learn to move slowly and deliberately so that you do not spook the snakehead before you are able to get into position for a shot.

It would be best to aim at snakeheads in shallow water because your arrow will travel a shorter distance through the water. Arrows tend to lose more energy as they penetrate longer distances through water.

If you want to have a successful bowfishing expedition during the day, you should consider bowfishing during springtime when snakeheads are spawning. However, you can do nighttime snakehead bowfishing in all four seasons with incredible results, but nighttime bowfishing requires you to have excellent bowfishing skills.

Storms stir up river sediments, making it difficult to sight snakeheads. In such instances, you should wait until the sediments resettle before bowfishing. When bowfishing snakeheads, it is inevitable that your arrow will get stuck on the bottom. Although you can always retrieve the stuck arrow by hand, it is advisable to carry several arrows with you in case your arrow gets lost in the silt.

What Gear Do You Need to Bowfish Snakeheads?

The gear you need to bowfish snakeheads depends on whether you intend to bowfish on shore or from a skiff boat. If you plan on bowfishing from the riverbank, you need basic gear, including arrows, and a specially equipped bowfishing bow. It is worth noting that you can use any bow for bowfishing. An ordinary hunting bow can do the trick. You can buy a bowfishing reel that will mount right to any hunting bow.

Let's take a look at the other gear you will need for bowfishing snakehead.

You will need special arrows to bowfish snakeheads  and other fish. Bowfishing arrows are heavier than ordinary hunting arrows. The extra weight enables them to hit fish with a more significant impact. Heavier arrows also retain energy as they penetrate through the water.

Bowfishing arrows are composed of fiberglass, making them sturdy, flexible, and hard to break. Their inability to splinter is a significant advantage since they frequently hit rocks on creeks and river bottoms. The arrows also lack fletching to increase their accuracy in water. 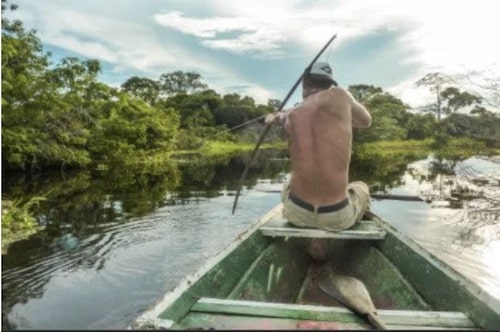 You need a boat if you intend to bowfish snakeheads on larger bodies of water. However, you should know that not all vessels are ideal for bowfishing snakeheads. It would be best to look for a boat with a deck so that you can have a high vantage point when stalking snakeheads..

You need a shallow draft skiff if you intend to bowfish snakeheads in shallow waters. The vessel should be quiet and sufficiently stable to enable you to stand on the deck without toppling over. Lastly, the boat should be narrow enough to navigate through different waterways.

You require a landing net to scoop snakeheads once you reel them close enough. The landing net should be deep and sturdy enough to handle a 20-pound snakehead without breaking. Its netting should also have the requisite tensile strength to hold giant snakeheads without tearing.

You should carry a bug spray if you intend to bowfish snakeheads at night. Since snakeheads inhabit vegetation-covered rivers and ponds, bugs are an inevitable nuisance on your bowfishing trip.  You will thank me for this one, believe me.

What are the Challenges of Bowfishing Snakeheads?

You will need to become a proficient stalker in order to get close enough for a shot. This can be frustrating to a beginner, because you are going to spook more snakeheads than you are going to get shots at.

Speaking of shots, a significant challenge you are bound to face when learning to bowfish snakeheads relates to light refraction. Light refraction makes it hard to zero in and shoot a snakehead accurately. The phenomenon distorts your perception of a snakehead’s actual position in the water.

If you aim directly at a snakehead that is underwater, you will shoot over the snakehead every time, because of light refraction.

You need to aim under the snakehead in order to hit the target. How far under the fish you have to aim changes based on how deep the fish is.

The only way to learn this is to practice and then use your instincts that you have learned through practice.

It can be quite challenging for a beginner, until you learn how far to aim under the snakehead.

It is advisable to check state laws and regulations for bowfishing before going out on your snakehead bowfishing expedition. Notably, different states have varying rules governing snakehead bowfishing. In the US, 49 states, save for Alaska, allow fishermen to bowfish non-game fish such as snakeheads all year round.

State laws also dictate areas and times of day you can bowfish snakeheads. Georgia’s regulations outlaw the firing of arrows when there are other individuals within a 150 feet radius. The state’s laws stipulate that bowfishermen can only bowfish snakeheads at night when the water body in question is more than 500 acres.

Virginia regulations permit bowfishing common carp, gar, grass carp, and snakeheads. The state’s rules also outlaw bowfishing snakeheads in water bodies with stocked trout. However, Virginia’s laws do not restrict the time of day you can bowfish snakeheads. Additionally, the regulations do not place creel limits on invasive fish species such as snakeheads.

Also, note that all states prohibit the utilization of poisoned or exploding arrows. These arrows cause unnecessary suffering to fish and contribute to environmental damage. As a beginner, you should look at your state’s licensure requirements for snakehead bowfishing.

Learning how to bowfish snakeheads is a gratifying experience if you are an outdoor enthusiast. All you need to do is study effective strategies and techniques for bowfishing snakeheads before doing it to shorten the learning curve. You also need the right gear to successfully bowfish snakeheads. As a beginner, you are likely to face challenges in making accurate shots consistently, but by consistently honing your skills, you can overcome the challenges and soon become an expert at bowfishing snakeheads.