Snakeheads are an invasive fish species that predominantly inhabits freshwater lakes, ponds and rivers. There are two species of snakehead in the United States, the Northern Snakehead and the Bullseye Snakehead. We will take an in-depth look at the best snakehead lures and baits for both species.

The Bullseye Snakehead are only found in the southern half of Florida due to their inability to live in colder water.

Snakeheads are not not only aggressive, ugly looking fish, they can actually breathe atmospheric oxygen, allowing the snakehead to live in "dead water", where other fish cannot live.

Adult snakehead fish typically feed on crustaceans, bream, beetles, carp, frogs, perch, and catfish. The fish fight incredibly hard and are known to be one of the most aggressive freshwater fish.

Fairly heavy tackle is required, because snakeheads are usually found in or near area with thick aquatic vegetation and you can bet that once hooked, they are heading straight for the heavy cover.

Let's take a look at the best snakehead lures and baits. 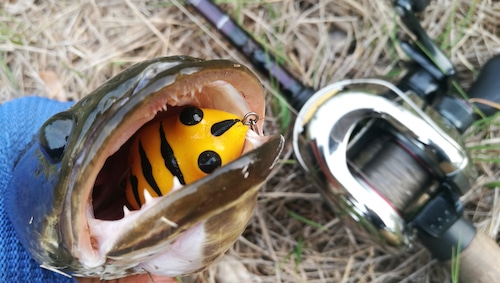 Topwater lures enjoy high popularity among anglers in Eastern US states. The lures have a weedless design that prevents snagging in the thick spatterdock common in snakehead habitats. The artificial bait also enables you to boost your chances of catching snakeheads, thanks to the considerable distance you can cast it.

Topwater lures are effective because they imitate rodents and frogs in the water and also prey on the predatory instinct of the snakehead.

This is adrenaline charged fishing, as you will find out when you have the wake of a big snakehead coming for your topwater lure. The topwater frog lure has a lifelike design that includes surreal swimming actions, high-resolution coloration, and lifelike three-dimensional eyes. The lure is made of eco-friendly PVC materials which taste like a real frog. The frog’s center of gravity allows it to have an optimal angle sitting to increase the chances of a hookup.

The frog is usually fished to imitate a swimming frog, with a pull and rest motion that looks like a frog using its legs to propel itself

If done correctly, it is a deadly technique for snakeheads. Buzzbaits rely on the aggressive nature of the snakehead and triggers their instinctive nature to eat anything that moves.  Buzz baits make it to the top five list of best lures because snakeheads tend to fall for them consistently.

Buzz baits come in different configurations, and certain designs are ideal for fishing bass, while others are really good at catching snakehead fish.

The Strike King buzzbait is particularly effective in catching snakehead fish. The lure’s two-sided blade design creates ripples that attract snakeheads’ attention in shallow waters. The item weighs roughly 1.6 ounces so that it can be cast long distances to cover a lot of water effectively.

More importantly, the lure has a lifelike design that buzzes through the water to create an impression of fleeing live bait, which the snakehead can not resist The Z-Man Original Chatter Bait is one of the best chatterbait models. The item flashes like a spinnerbait, vibrates like a crankbait, and resembles a jig. The chatterbait also comes with a razor sharp hook that does not allow snakehead fish to escape once they bite it. 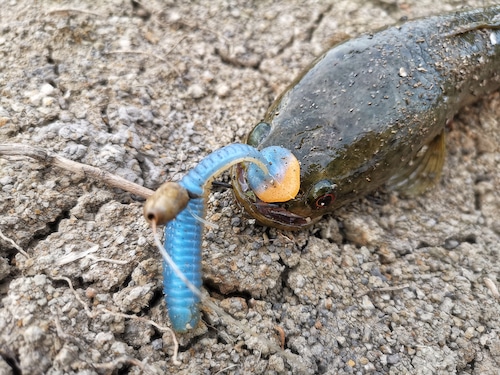 The Storm Wildeye Swim Bait is highly popular among snakehead anglers. This swimbait real features a soft, lifelike body. Notably, the lure sports a robust soft body with an internal lead head and a bio-salt impregnated tail. The swimbait comes with a pre-rigged body and a holographic swimming foil finish. Its three-dimensional eye also gives it a lifelike appearance.

Jigs cover a wide range of artificial lures for snakehead, but the most popular are a weighted jig head with a plastic body of some sort. They range from curly tail and flat tail grubs to crayfish and other shapes.

Any of these lures will consistently catch snakehead.

Jigs really shine when the weather gets cooler and the metabolism of the snakehead slows down.

The Terminator Pro’s Jig stands out as one of the best jigs available. The item is made with a heavy VMC black nickel hook, contains a single rattle and weighs 3/8oz. Its relatively light weight allows it to fall through the water column, enticing any snakeheads nearby. You can cast, flip and pitch it in and around spatterdock and other aquatic vegetation. Other Effective Lures For Snakehead 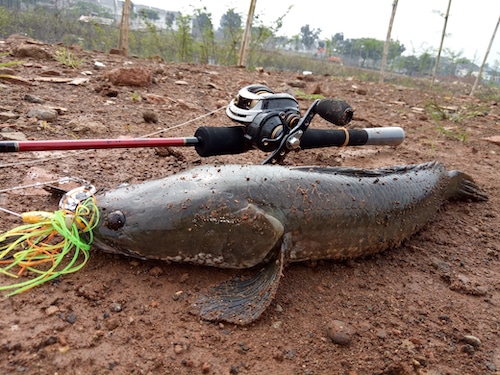 Spinnerbaits are one of the most popular lures for bass fishing and they are also deadly on snakeheads.

They consist of a spinner blade and a hook with a skirt around it. As they are retrieved, the blade spins, producing a snakehead enticing flash, while the skirt pulsates enticing the strike of any snakeheads lurking nearby.

Our favorite spinnerbait for catching snakehead is the Booyah Blade Spinnerbait. It has a double willow blade for lots of flash and vibration along with a 55-strand bio-flex silicone skirt that undulates enticingly. 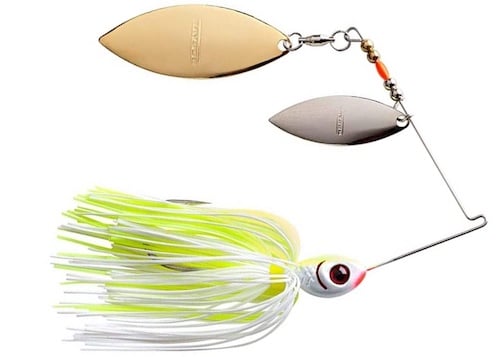 Spinnerbaits are simple to fish for snakehead. You simple cast it and retrieve it quickly to take advantage of the aggressive nature of the snakehead. 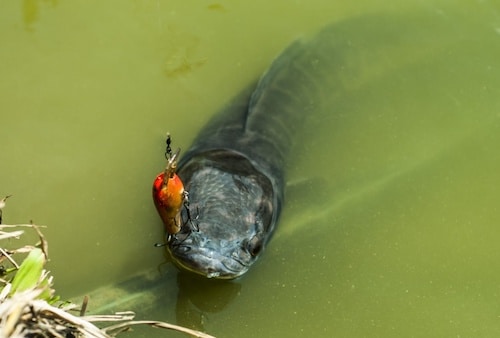 Crankbaits are another one of our favorite lures for snakehead. They are made to imitate a baitfish and are usually made of plastic or wood with a plastic lip that makes the lure wobble or swim like a bait fish when retrieved.

The come in all different shapes and sizes, from short and fat, to long and slender. It is best to choose a crankbait which imitates whatever type of bait fish is prevalent in the area.

The size of the plastic lip determines how deep a crankbait will run. When you are fishing for snakeheads, you want a fairly shallow running crankbait, so try to match the crankbait to the depth that you are fishing.

One of our favorite crankbait lures for snakehead is the Jabber Jaw Squarebill Crankbait. It is a shallow diving crankbait with great action, holographic eyes and ultra high definition paint job that looks super realistic in the water.

You can use natural lures if your state’s regulations allow you to do so. Here are some natural lures that are highly effective in catching snakehead fish.

If you plan on fishing snakeheads in any of the eastern and southern states with considerable snakehead populations, you should consider using frogs as live bait. You can easily catch frogs that inhabit the spatterdocks of the Potomac River. Frogs are also effective in luring snakeheads because they are common snakehead prey.

Fathead minnows and golden shiners, are excellent natural lures for snakehead fish. These baitfish tend to swim frantically and prompt the reaction of snakehead fish. You need to hook them either through the lips, or just behind the dorsal fin and fish them under a float.

Banded killifish make up the snakehead’s most common prey in the natural environment in the eastern US. Notably, this makes banded killifish an excellent natural lure for catching snakehead fish. You can use minnow traps to catch them and hook them just like the fathead minnows.

How to Fish for Snakehead Fish 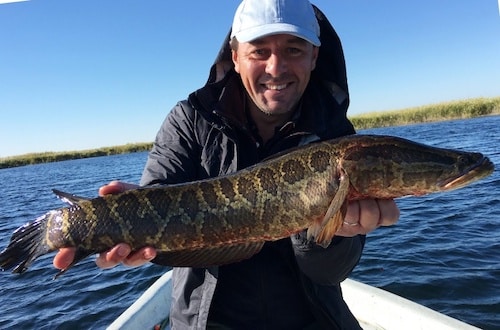 There are basically 3 ways to catch snakeheads.

Artificial lures are probably the most popular way to fish for snakehead.

Lures work best during the summer and the spring when the weather is warmer. However, cold snaps may minimize the effectiveness of lures in catching snakehead fish.

Our favorite way to catch snakeheads is on topwater lures, although there are many snakehead lures that are effective during warm weather. We will get into those in depth below.

You can also fish snakehead fish using live baits. The technique takes advantage of the fact that snakeheads employ an opportunistic approach in their feeding patterns. The fish cannot resist an opportunity to bite anything that swims or wiggles in their vicinity.

The most effective baits for catching snakehead fish range from mummichog minnow to crayfish. Most anglers prefer to use a bobber and suspend their bait roughly three feet below the water surface. The ideal depth for fishing live bait depends on the water depth and the weather. Cold weather often prompts anglers to fish their bait deeper.

The last way to fish for snakeheads is bowfishing. The technique entails using a special bow and arrow to shoot snakehead fish in shallow waters. The bow has a reel attached, and the arrow is barbed to ensure that the snakehead does not escape as you reel it in.

Where to Find Snakehead Fish

In the US, Snakehead fish originated from Asia and Africa. Anglers identified the first-ever snakeheads in the United States in 2002 in a fishpond in Crofton, Maryland. Two years later, considerable snakehead populations had populated Virginia’s Potomac River.

The bullseye snakehead species is predominantly found in south Florida. All snakehead species thrive in shallow water with thick vegetation. It is no wonder that the Potomac Basin, which has thick, lush green vegetation, has the highest snakehead population in the country.

Whether you are a beginner or an experienced snakehead angler, you need the right snakehead lures to achieve optimal results. You also need to know where to find considerable snakehead populations. It is worth noting that artificial baits and lures are as effective as natural lures.

Modern rods and reels help prepare you for this hard fighting fish.

Snakeheads are good to eat, and eating them is a great way to keep their populations in check while supplying your friends and family with a great meal.

Click here for our favorite snakehead recipe, as well as a guide to cleaning and preparing thgem.