Because Koi fish are associated with Japanese culture in Japan, many people wonder whether it is illegal to eat Koi fish in Japan. In their country, Koi fish are given a place of privilege for their brilliant whites and colors. They are found in ponds at Buddhist shrines, parks, and private homes.

It is not illegal to eat Koi fish in Japan, in fact, Koi were brought to Japan as a food fish. Koi are 'Amur carp' and are large colorful fish you can see in the photos we added here. You have probably seen them in decorative fish tanks wherever in the world you are. I've seen them in Hawaii, Thailand, Florida, California, and Taiwan.

To the Japanese, the Koi is a symbol representing some positive qualities. Perseverance, strength, courage, patience, and success because of never giving up are all attributed to this colorful fish.

In contemporary Japan today, a big Koi is around $100 USD. Few people eat them in Japan, but sometimes they'll be on the menu. In other places in the world, they are eaten more often. 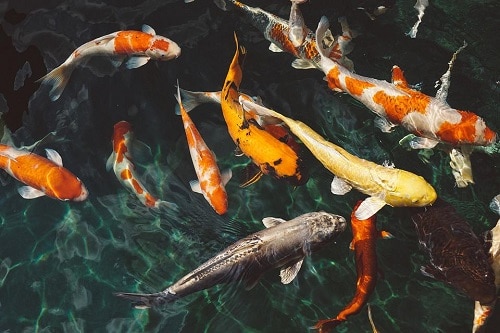 Is It Illegal to Eat Koi Fish in Japan?

Koi fish (Species: Cyprinus rubrofuscus) are colorful carp that live naturally in freshwater lakes in Asia. They are members of the family called Cyprinidae carp and the genus Cyprinus.

They are usually about 12-15 inches long as adults, though some varieties of giant Koi can reach 36 inches long and weigh up to 26 lb. These are colorful fish, with some of the most prominent colors being white, silver, gray, pink, purple, blue, yellow, orange, red, and bright green.

Koi fish are shaped like other carp, generally round with a flat fleshy tail. These carp eat algae, plants, and sometimes insects or other tiny animals including fish. They thrive in ponds and don't require much oxygen. They are active during the day and night and should be fed daily.

Koi are cold-water fish with their ideal temperature range being 59-77°F, though they can survive and even thrive at temperatures much higher and closer to 90°F.

What It Feels Like to Eat Koi Fish from Japan

All over the world, you can find cheap carp to eat. In the states, not many of us eat them but since they have overrun some of our lakes and rivers they are starting to be rebranded as great-eating fish. I'm not falling for it, but some people are insisting they're good to eat!

The general consensus of people who are putting Koi on a plate is that they are a bit oily and they have a nutty flavor that is more prominent than with most other carp.

It's actually rather dangerous to eat carp that were raised in polluted rivers and lakes, but Koi have generally been farm raised and bred and they are considered safe to eat assuming they have been raised in clean water.

Some people think that it is dangerous to eat koi fish from your own backyard pond, but that's not true unless you use pesticides or other chemicals around your Koi pond. Some people don't like the thought of eating them because they have reached a sort of domesticated status. Some people insist their Koi have different personalities and can even respond to their names.

Most Japanese are not eating Koi regularly. These are expensive fish. They do come with a handful of health benefits for your body if you do eat them. Let's cover a few of those below.

A 7.6 oz. filet of carp has about 277 calories and 80% of your protein needs for the day. It has 48% of your daily cholesterol and only 5% of your daily sodium. Koi is very high in Vitamin D and has solid amounts of calcium, iron, and potassium. It has good amounts of B-complex, vitamin E, choline, and a host of important minerals. In short, it's quite healthy.

2. Helps In Blood Production and Revival of Muscles

Koi fish meals are a great source of protein and a rich resource of omega-3 fatty acids. Research shows that Omega 3 fatty acids are great for repairing muscle and improving blood circulation.

Omega 3 fatty acids have been shown to help lessen heart disease and stroke and may contribute to controlling rheumatoid arthritis, eczema, and lupus, and even protect us against cancer to some degree.

How much is koi fish?

The price for Koi depends on their age and whether their pattern is vibrant, dull, colorful, rare, etc. The Platinum Ogon type of Koi often sells for $500 to $1,000 per fish in Japan. The most expensive Koi to sell was a very large (3 foot long) Kohaku Koi that was sold for 1.8 million dollars.

Why is Koi fish not commonly eaten?

Koi fish are expensive and are seen by most people as worth much more as a piece of art or decoration than they are on the dinner plate. Many people treat their carp as a pet and couldn't stomach the idea of eating their pets.

Do koi fish feed on other fish?

Koi fish are known to feed on smaller fish as well as plant life. They are omnivores, so anything goes really. If you have a lot of fish in the same pond with them, and not enough plants for them to eat, they will eat more fish.

If you don't want your big Koi carp to eat the smaller fish in your pond or aquarium make sure you feed them daily some specialty food. There are many retail outlets online that sell special Koi food that will keep the fish healthy and living for a long time.

Koi typically live 25-35 years when kept in ideal conditions by breeders and other Koi aficionados. If you don't have much experience with the breed, your Koi may live 3-5 years on average.

Why is Koi fish in Japan so important?

Well, Koi fish in Japan are treated with reverence for their coloration, lineage, and personality traits. To the Japanese, a Koi is a symbol of determination and grit. They swim upstream for many miles without quitting. They swim against the current and this is respected by Japanese culture. Kois are looked at as symbols of strength, patience, success, and courage.

People around the world don't generally eat Koi, but you can find it in certain places like Bengali and Thailand. Occasionally, the Japanese themselves will eat Koi in soup or prepared in other ways, but not usually used for sushi. To the Japanese, the fish is a cultural symbol more than it is a food entre.

If you get a chance to eat Koi, there's no reason you shouldn't unless the price is exorbitant. There are plenty of other fish that are better tasting and cheaper than Koi to eat though. Remember, if you're in Japan, you may offend someone or they may look at you strangely if you ask where you could find some Koi soup!

RELATED: Can You Eat Snakehead Fish

Brian is an outdoor writer and the youngest member of our team, but he is extremely knowledgeable when it comes to fishing and different techniques for catching different species. He shares valuable information that the younger generation can relate to. When he is not fishing, you can find him hanging with his friends and gaming on his computer.