There are a couple of reasons sushi can make you poop frequently. Raw or undercooked saltwater fish of any kind can contain roundworms. These are parasites living in the tissues of the fish, often in the muscle.

When we eat sushi, we eat these larvae and they survive inside us for a short while, attaching themselves to our stomach lining and intestines. While there, they can cause us gastrointestinal distress like pain, a feeling like we need to throw up, and diarrhea.

Raw fish can also contain harmful bacteria and viruses that can disrupt the natural rhythm of your bowel movements.

Another reason you may need to poop frequently after eating sushi is that one main ingredient in sushi is mayonnaise. Mayonnaise has uncooked egg in it which spoils fast when not refrigerated. If the sushi you eat has not been refrigerated up to the point you eat it, you can have stomach problems due to salmonella bacteria.

The urge to poop excessively won't happen for 6-24 hours after you've eaten the bad sushi. Typically it will take about 3 days to go away. You'll want to drink a lot of liquids and make sure you're replenishing your electrolytes, salt, and essential vitamins.

Does Sushi Cause Diarrhea?

The parasites, bacteria, or viruses inside the raw fish you consume can cause diarrhea. It is best to ensure you are getting fish from a clean source and pay attention to any other ingredients added to the sushi which could cause diarrhea.

Is Sushi Safe to Eat?

Salmonella, Listeria, and tapeworms can all affect your health and cause you some bowel problems for a couple of days until your body fights off the infection. Sushi and sashimi are somewhat dangerous to eat because they are raw fish, but the chance of getting ill from eating some is slight. However, if you eat a lot of sushi, you will eventually get sick from it.

Keep in mind that some fish like swordfish and tuna are near top-level ocean predators and they collect the dangerous chemical mercury in the tissues of their body. When humans eat too much fish containing mercury (cooked or raw), we can suffer brain damage and more.

The World Health Organization says mercury in food can cause neurological and behavioral disorders. Symptoms of memory loss, insomnia (difficulty sleeping), tremors, headaches, and more serious symptoms may be observed with the ingestion of too much mercury.

Why Do You Often Crave to Eat Sushi?

You may crave sushi because you love eating it. That's normal. There are other reasons your body can crave it too.

Sushi cravings indicate a shortage of protein, Omega-3 fatty acids, or iodine. Sushi is abundant in these nutrients. Some say when your liver is stressed from processing too many starches, wheat, sugar, and other hard-to-digest foods that it craves a cool food like seaweed or cucumber. Not sure about the validity of that, but a number of sources are stating this as fact.

Is Sushi Difficult to Digest?

Meat and fish can take days for the body to digest. They have complex proteins which do not digest quickly like fruits and vegetables.

The Japanese have unique enzymes in their gut bacteria acquired over time that helps them digest raw fish more easily. North Americans apparently don't have this same gut bacteria. It's hypothesized that they may have received these enzymes through eating bacteria on seaweed found in the open ocean.

Can You Get Diarrhea If You Eat Raw Fish?

Yes, there are many bacteria and viruses that can cause you to get diarrhea after eating raw fish such as sushi, or plain sashimi. Vibrio parahaemolyticus is a bacterial species found in undercooked or raw shellfish and other marine organisms, especially oysters.

Vibrio infections can give a person symptoms like nausea, chills, fever, headache, vomiting, abdominal cramps, and watery or bloody diarrhea. Luckily, most infections resolve themselves within 72 hours. 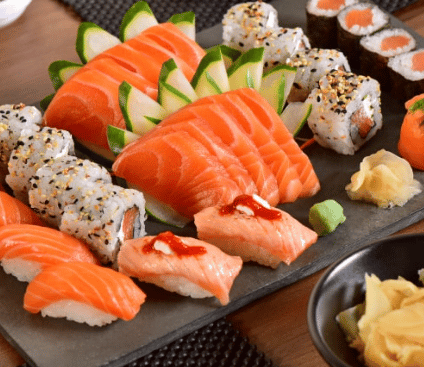 Can You Become Ill From Eating Excess Sushi?

Yes, you can become very ill with mercury poisoning if you eat sushi or sashimi often and it includes fish typically high in this dangerous metal. Fish that should be off-limits and may contain high levels of mercury include Tilefish from the Gulf of Mexico, Bluefin Tuna, Sharks, Swordfish, and mackerel.

Raw fish should be limited because all marine and freshwater species have it. Some species have more than others. Pregnant women and children are more sensitive to mercury poisoning than others.

Yes, it is considered a violation of Japanese etiquette to combine soy sauce and wasabi seasoning (paste) together on your sushi, or with any meal you're eating. Wasabi is to be placed on the fish portion of your meal and soy sauce can be used to dip the bottom of your sushi roll. The two ingredients should not be directly mixed.

Can California Rolls Cause Food Poisoning?

Yes, California rolls can cause food poisoning just like many other foods including raw fish, beef, pork, chicken, eggs, fruits and vegetables, water, and many more.

How can you tell if your sushi contains Salmonella? You usually cannot tell your food is infected, as there are no outwardly visible signs.

To prevent getting food poisoning from California rolls and other forms of sashimi, you can buy from clean restaurants and make them at home yourself. Some street vendors or food trucks might be less clean than restaurants that have existed for years.

Keep your ear out for news of foods that may be affected by Salmonella outbreaks, these are often publicized immediately to help people avoid contaminated food items.

Is Sushi Healthy for Your Diet?

Sushi can be made with healthy ingredients like cucumbers, fish, and seaweed, and unhealthy items can be avoided, so yes, it can be a healthy addition to your diet. Sushi has Omega-3 vitamins and protein. The problem is when oils and mayonnaise are added, increasing calories and fat intake.

Is Sushi Healthy for Your Stomach?

Some research has found that eating sushi can increase your gut health and other body functions. Still, you shouldn't overdo it because it has some unhealthy ingredients as well. If you can find organic sushi with only healthy ingredients, then stick with it! It may help your stomach and digestive system.

Will You Die If You Eat Raw Salmon?

Anyone with a compromised immune system can die of a bacterial infection from eating raw salmon. If you're going to engage in this practice, make sure the salmon you eat was flash-frozen immediately after catching it to reduce the chance that bacteria or parasites have a chance to infect you.

To ensure the salmon you eat is safe, cook it. Cook your salmon thoroughly to kill all parasites and harmful bacteria for risk-free salmon eating. Cooking salmon to at least 63°C (145°F) may significantly kill the parasites and bacteria in raw salmon.

If you're going to eat raw salmon make sure you freeze it first at minus 4°F or colder for several days, or at minus 31°F for at least 15 hours.

Sushi is one of those foods that appeal to millions of people across the globe, I love it, and you probably love it too!

If you can deal with the fact that sushi can make you poop frequently and that you can have other symptoms from bad sushi that happen once in a while, then what is there more to say? We all eat things that aren't that great for us. Alcohol for one, right? Milkshakes, ice cream, McDonald's Whoppers, or other fast food are all full of fat that we can do without.

Try to choose your sushi from clean establishments that have a history of serving good food and you'll be fine. If you get diarrhea from sushi, see a doctor if it lasts more than a couple of days.

RELATED: Can You Eat Koi Fish In Japan

Brian is an outdoor writer and the youngest member of our team, but he is extremely knowledgeable when it comes to fishing and different techniques for catching different species. He shares valuable information that the younger generation can relate to. When he is not fishing, you can find him hanging with his friends and gaming on his computer.